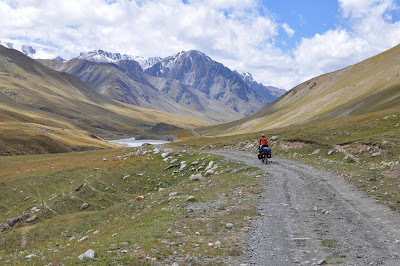 I've been trying to write more. To keep the time between experiences and recording those experiences fresh, to put pen to paper shortly after thoughts and emotions make their way to the surface. It's helpful that I ran out of reading materials so instead of reaching for a book, I've been writing. So in an attempt to deliver a genuine recount of the past 2 - 4 weeks, I'm compiling this post from snipets of writings from the past 3ish weeks taken from any and everywhere; huckered up in my tent during a freak hail storm, my sleeping bag shortly before breakfast, the side of the road, in a random car while hitch-hiking. Hope you enjoy.

August 19: We have finally arrived in Kyrgyzstan. This place has such a warm welcoming feel to it, just as I remembered. The farmers all shout friendly greetings, wave and deliver some of the warmest smiles I've encountered on this trip. The mountains impressively snow-capped at over 6 and 7,000 meters (some higher than any mountains in North America). The fertile valley of Karkara is laiden with ripe fruit trees, vegetable gardens and easy-going, friendly faces. Today we encountered a woman selling honey on the side of the road. She spoke to us in an extremely gentle manner (in Russian) reminding me of my mother's gentle spirit. We bought 1.5 kg of fresh honey from her, as she offered the gentle phrase 'organic product' with a warm smile. Even at the border the Kazakh guards made me unpack my larger bag and the cue for getting a stamp out of Kazakhstan was slightly stressful and uptight. The Kyrgyz guard was listening to pop-dance music, he stamped my passport then offered a kind 'Welcome to Kyrgyzstan'. I'm reminded of why I felt compelled to return to this amazing place.

So we decided to embark on one last mountain adventure before Andrew's time had come to an end. We spent a day or so picking people's brains in Karakol on the most appropriate adventure for the occasion. Karakol is located on Lake Issy-Kul, the 10th largest lake in the world (by volume) and the 2nd largest saline lake in the world (next to the Caspian Sea). I had visited the south-western shore of Issy-Kul on my last trip but the south-eastern shore offers much more scenic views of the proud mountains that this county has to offer. We ended up spending a few days at one of the best hostels I've ever encountered (the best shower I've had since Beijing and friendly owners eager to strike up conversations) to which we randomly stumbled across. We plotted a two-week traverse of some fairly ambitious mountains and tall passes and waited for our weather window (there was quite a lot of rain up to this point and much more forecasted for the future....meaning snow above 3,000 meters). We soaked up some English speaking with loads of friendly tourists and even met a German cyclists who informed me that he'd read my blog in preparation for his trip (I didn't think anyone actually read my blog).

So off we went...cycling along the southern shore of Issy-Kul until reaching the town of Tosor. The ominous Tosor Pass, weighing in at 3,900 meters high, was to be our challenge. Adding to this challenge was the forecast of a winter storm coming the next day, delivering shivering temps and snow above 3,000 meters. We were currently at 1,600 meters; meaning we'd have to climb some 2,300 meters in a day (7,500 ft of elevation gain). Looking back on my previous cycle logs, I'd never attempted this much climbing in a day. And the thought of being stuck at nearly 13,000 ft ill-equiped for a winter storm was slightly un-nerving. But we found ourselves with no shortage of confidence or ambition after Mongolia so up the never-ending hill we charged....for nearly 8 hrs. We only had 30 km to log (less than 20 miles) but it was a long, painful slog straight uphill. We ran into a group of 16 Dutch trekkers about half-way through the climb that waved us over and offered us lunch and tea (they were on on a guided trek). It was a welcomed break from the monotony of hill climbing but once I got back on the bike, my legs didn't want to go. Something like a stubborn donkey or a ceased engine. There was actually a moment when I envisioned myself sleeping half-way up the pass and weathering the storm. But once I broke through the donkey legs (or perhaps the Snickers were oil for my leg pistons), my legs turned into jello and I knew I could continue for some time....I just couldn't stop again. We finally crested the pass around 6:30 pm (it's dark around 8 pm) and quickly threw on some warmer clothes before attempting to drop as much elevation before the sunlight passed and the winter storm waltzed into the mountain range. The road was in poor condition on both sides, which meant pushing up steep inclines of loose rock on the way up and walking down steep, loose slopes of stone on the way down. It was slow going....slower than we'd hoped for. As the sun disappeared, we found ourselves setting up our tents at around 3,400 meters (11,000 ft) and hoping for the best.

We more or less landed on the best case scenario. The clouds slowly drifted in and socked in the valley, providing extra warmth and insulation. The precipitation waited until the morning to deliver it's first hail/snow/rain drops, to which Andrew and I hulled up in one tent and read. There was a small break from the frozen precip around noon and the sun made a brief appearance, prompting us to pack up the tent and bomb down the mountain in hopes of warmer temps and more stable weather at lower elevations. We made some fairly significant progress dropping some 300 meters within the first few hours. Things were looking promising. Then came the first stream crossing. And the second. We were able to navigate these without getting terribly wet. Then came the third and the fourth. These were fairly significant river crossings requiring some scouting of lines and changing into sandals to keep the shoes dry.

We gradually dropped out of the scenic mountainous valley after climbing one more large mountain pass and eventually landed in the big city of Sari-Bulak. I had visited this town on my previous trip and it was exactly as I had remembered: one cafe, one guy selling petrol from a bucket and a bunch of taxis waiting for more people. We enjoyed beefsteaks, multiple cups of chai, baskets of nan and even a smoked fish from the nearby alpine lake Issy-Kol. The total bill was under $6. We then spent a day and a half in Kochkor keeping a close eye on the weather and restocking food for the next leg of the mountain traverse.

September 2: I'm writing this from the comfort of my sleeping bag. The frosty, frozen dew is thawing with the morning sun and dripping from my rain fly.  The nights have been getting cold. I'm wearing almost every piece of clothing that I brought on this trip to bed and still hovering near the line of comfort and cold through the night. The MSR stove is roaring just outside my tent, slowly warming the icy water in preparation for coffee. The Kyrgyzstan leg of this trip has been amazing. I can't tell if we've lucked out with dodging the nasty weather that has narrowly missed our path or if the nasty weather itself has been unlucky. The seasons are definitely changing here, the clouds dissolve to reveal a fresh powder coating, which makes the mountainous contrast even more beautiful. The cars are few and far between. Two days ago, we only saw 1 car (albeit he passed us 3 times). This was an amazing day for us. We literally raced through 2 ominous weather threats, somehow threading the needle into the one small patch of blue sky within sight. We summited Karakol Ashuu (Pass) at 3,500 meters and were literally chased down the mountain by a front of winter weather at our heels. I tried to rush across a stream crossing and ended up getting my feet soaking wet in freezing cold water. I went to change into my sandals and realized I had lost one of my sandals somewhere on the rocky descent. So with the storm literally hovering overhead, providing a taste of what was to come if we waited another 5 minutes, I quickly changed into my warmest socks, put the one sandal on my foot and headed down the hill (the other foot was just a sock). I can't say this was exactly my proudest moment, but at the time it felt better than putting my foot back into that nearly frozen soaking wet shoe. I tried to pedal with my heel as the frozen water had made my foot mostly numb. We were luckily able to drop another 200 - 300 meters before setting up our tents. When we looked back at the pass, it was completely socked in with a nasty wintery snow storm.
[It took me nearly 2 hours to bring my feet back to feeling.]

September 3: We are nearing Bishkek. I am extremely excited to reunite with the Kyrgyz family that I met some 6 years ago and shared such a strong connection. I'm excited to see their new house and meet the husbands and babies that have immersed since I was there last. Andrew is preparing to fly out in less than 2 weeks. I'm grateful for his presence on this trip. We took this idea from a mere concept to a reality in less than 6 weeks. We've been on the road for nearly 3 months now, crossing 4 countries and nearing 2,500 miles. We've been through a lot together; navigating the never-ending hurdles that arise when traveling through foreign lands without speaking the language (especially on push-bikes).

We obviously arrived in Bishkek since writing this and reconnected with the Kyrgyz family, the Sultanovas. They are possibly the most amazingly kind and genuinely happy people on this Earth (next to my family of course), contagiously passing along smiles and laughter. They have welcomed us with open arms and treated us like their own family. We've spent the past week enjoying a life quite contrary to the dirt-bagging sleeping in tents smelly cycling life that we've lived the past 3 months. We've experienced Kyrgyz ballets and theatres, sushi, pizza and beer dinners, real coffee, ice cream, movies, outdoor family style dinners with traditional Kyrgyz foods and farewell toasts to Andrew and Ilona (the eldest daughter who lives in Geneva). It's been an amazing cap to an amazing trip. I'll try to write another post to bring everything together but I wanted to take a moment to give a proper farewell to Andrew as I saw him off on a plane to India yesterday. Farewell to a good loyal companion. It's been a wild wild ride. 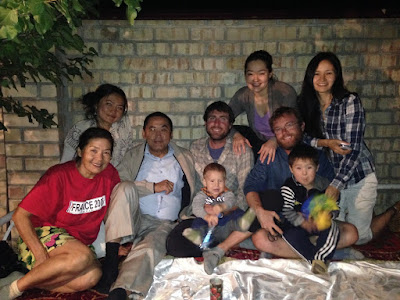